Each stage in culture is also a creative process and by virtue of this goes through the available creative stages. For example, within the Modern Age (Late-Axis culture) we can see quite distinct Early-, Middle-, and  Late-Axis substages. First came a period of initial inspiration and discovery. This was the time of Michelangelo, Da Vinci, and Raphael, and the beginnings of Europe’s artistic Renaissance; of Columbus, Cortez, and Maggellan, and the birth of a new age of exploration; of Galileo, Newton, and Descartes, and the first emergence of the modern scientific paradigm; and of Martin Luther, and the first images of a new kind of relationship with the divine.

Following this came a period with a decidedly more Middle-Axis, the Age of Empire. We saw then struggles between the great European powers for dominion in the new world, open conflict between social classes, and the first establishment of the structures of industrialization. The last two hundred years, what we might call the Age of Technology and Individualism, has been most definitively Late-Axis, with the establishment of institutional government, a new elevation of the individual in thw writings of people like Thomas Paine and Jean Jacques Rousseau, the realization fo universal education, and the full flowering of scientific preeminence. 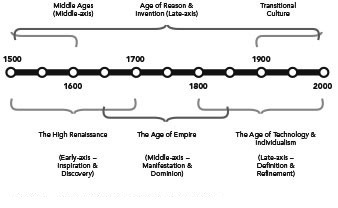 Within any sub-stage, we can see even further creative fluctuations. The last part of the twentieth century in the United States illustrates this well. Within encompassing Transitional dynamics, we can see much smaller cycles that imbued this esthetic with qualities from each of creation’s stages. In the sixties and early seventies we saw primitive and Early-Axis sensibilities: the magical youth of the “Flower child,” strong advocacy for archetypally feminine values such as earth and peace, neo-pagan sexual norms, and a fascination with both Eastern and Western mystical thought. The mid seventies and early eighties were marked by a growing Middle-Axis emphasis: a resurgence of fundamentalism in religion, mounting conservatism in politics, and in music the sudden popularity of previously ignored Middle-Axis forms such as Country western. Moving more fully into the eighties we see the emergence of a more Late-Axis values in a kind of “new materialism.” Increasingly “yuppie values came to predominate. The carriers of the “answers” in the sixties we pacifists, gurus, and hip psychologists; in the seventies they became fundamentalist preachers and the new right; and in the eighties we look to  business leaders, management consultants, and economists to find out how things “really” work. As a general rule of thumb, if we look back thirty years, what we see will seem remarkably familiar. 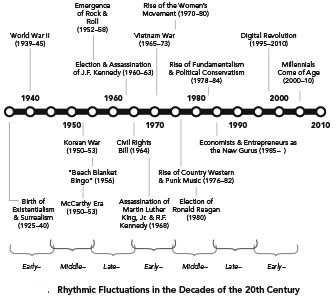 [As we move more fully into Transitional culture, sub-cycles become predictably less clear. But the dramatic innovations of the digital revolution are certainly suggestive of Early-Axis sensibilities, as are the entanglements of the Iraq and Afghanistan wars of more Middle-Axis proclivities.]